These are the stories included in this blog. They are listed in order of latest to earliest added. You can either enter a search in the provided space, or scroll to the bottom to find the earlier posts. I hope you enjoy reading these as much as I enjoy researching and writing about this aspect of our local history.

Murder on South Palafox
Workplace violence in 1905
The Tragic Death of Big Ed Morris
Fight at a Fatal Fish Fry
The Curious Killing of Charles Sudmall
Successful Russian Businessman killed in town
Tale of a Lynching
Prisoner J.C. Evans, left dead on the side of the road
Sheriff McDaniel of Jackson County
Shootout in his Driveway
The 1915 Wyman Murders
Home invasion and killing of Elderly Couple
The Kidnapping of Mrs. Phelps
Holmes County 77 year old widow kidnapped and beaten.
The Mulat Murders
Murder of Julian, and Mae Edwards
Bank of Jay Part II
Were the robbers Pensacola Police Officers?
The Jay Bank Robbery
January 1963 Bank Heist
Killing in Crestview

Was there really Justice for Lester Wilson's death?

The Phantom Ghoul of Whitmire

Grave desecration at the Roberts, and Whitmire cemeteries

The murder of Daisy Locklin Padgett

The Turpentine Feud of 1911

The Cooley family ambush and events leading up to it.

Articles about the shootout at the L&N Depot in Milton

The murders and arson of an entire family near Allentown

Family attacked as they slept

The Short Life and Fast Times of Frank Penton

The Fate of Judge Trueman

The Killing of John Wesley Penton

Shot down in the street in Milton

The Trial of C. B. Penton

The 1931 Pursuit and Capture of Criminals Near Milton

More to come on this one

Woody
I'm interested in Depression Era crime, especially events that have been mostly forgotten, and under reported.

﻿
S. G. Collins drove out to East Milton to talk to J. E. Estes.  They sat on the curb in front of the Estes home and talked for about 40 minutes.  When finished, Collins began to cross the road to his car, when he hesitated, and turned as if to say something else, or maybe to wait on a slow moving car to pass.  When the car drew close, a shot was fired, and Collins fell to the ground.  Estes ran to his side, and Collins said, "He got me, get the tag number, and call the doctor!"  Estes looked to see the car, but it was already half way across the bayou bridge, and all he could tell was that in was an A-Model Ford.
Collins didn't last very long.  Ten pellets from a 12-gauge shotgun had entered at the shoulder, and ranged down through his body.   There was a coroner's inquest, and testimony given, but no arrests for the crime, and no suspects named.
Collins was a well-known, and popular man in Santa Rosa County.  His road construction business was busy building roads in Northwest Florida, South Alabama, and in South Carolina.  His home on Berryhill was packed with business men from all over paying their respects.  He was laid to rest in the Milton Cemetery.  The murders of Aubrey Gainer, and S.G. Collins, were never to be solved to anyone's satisfaction.  Through the efforts of Collins' older brother, Long John Collins, there eventually was an arrest, and trial in 1934.  That will be covered next time. 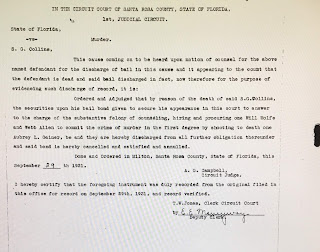